BotH2nia kick-off confirmed expectations: the momentum for building the hydrogen bay of the North is now

Today’s BotH2nia-webinar, held as the national kick-off in Finnish, attracted around 200 participants. Sixteen speakers gave concrete presentations about how they are tackling the question of building the hydrogen bay of the North. With their presentations, they already started the dialogue now needed. In other words, BotH2nia was born.

Ms. Helmi-Nelli Körkkö from Business Finland Germany described the need of hydrogen in German plans for energy future. Mr.Mika Anttonen, the chairman of the board of St1 concluded that the storage of renewable energy requires big solutions, for which hydrogen and products refined from it are a good alternative.

On Twitter, Mr. Aleksi Lumijärvi from the audience and another speaker, Fingrid’s Mikko Heikkilä, commented on Anttonen’s note that both the challenge with scaling up renewable electricity production and its potential is huge. 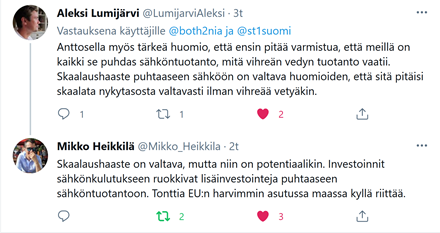 Mr. Pasi Pitkänen sits in a sweet spot in this issue as the development director of Raahe. He pointed out the potential in the region and emphasized the importance of the regional public sector as an enabler of huge investment opportunities. He was seconded by his colleague in Kokkola, Mr. Jonne Sandberg, whose presentation made it crystal clear how cooperation in land use is needed between cities and municipalities before any hydrogen networks can be built.

Researchers from Oulu and Lappeenranta universities, Mr. Timo Fabritius and Mr. Petteri Laaksonen, gave excellent examples of what kind of work is needed to provide the facts that a fruitful and in a long run both sustainable and profitable development can take place.

Ms. Laura Huomo from Roschier Attorneys highlighted the different regulation-related questions activated as soon as hydrogen investment initiatives are introduced in the discussion.

Ms. Sara Kärki from Gasgrid Finland shared the recent fruits of international cooperation within the European Hydrogen Backbone network. In her maps, the vision is that the hydrogen network in Finland will gradually be built within the time frame of 2030-2040, beginning for example from the Gulf of Bothnia.

Ms. Kärki’s colleague in electricity, the national TSO Fingrid’s representative Mr. Mikko Heikkilä described the amount of wind power initiatives filed at their desk right now. Even in his presentation, the concrete integration of energy sectors that is needed when building hydrogen value chains was clearly described.

The last mile of the webinar was run by two large companies, SSAB and ABB. Mr. Sakari Kallo presented, how 7% of Finnish GHG emissions can be cut in steelmaking, with some help from clean hydrogen. Mr. Simo Säynevirta laid out the current plans of Nokia and ABB to solve the real-time optimization challenge created by re-building the energy system so that it can take advantage of eg. hydrogen.

The time to act is now

The event was closed by Mr. Reijo Munther from Business Finland presenting the possibilities for financial support that are provided by the IPCEI funding tool.

In his closing words, the initiative taker Mr. Matti Malkamäki from Aurelia Turbines described the next steps for the initiative. BotH2nia will be built up as a common communication project and brand between the different stakeholders in the Gulf of Bothnia. Together with the event’s speaker, Ms. Minna Näsman from CLIC Innovation, he is happy to conclude after the event that the kick-off has now taken place and the next phase is to make all this available on the web and to organise both the theme group work and international events.

You can listen to the event recording here.

Media coverage of today’s event (to be updated)