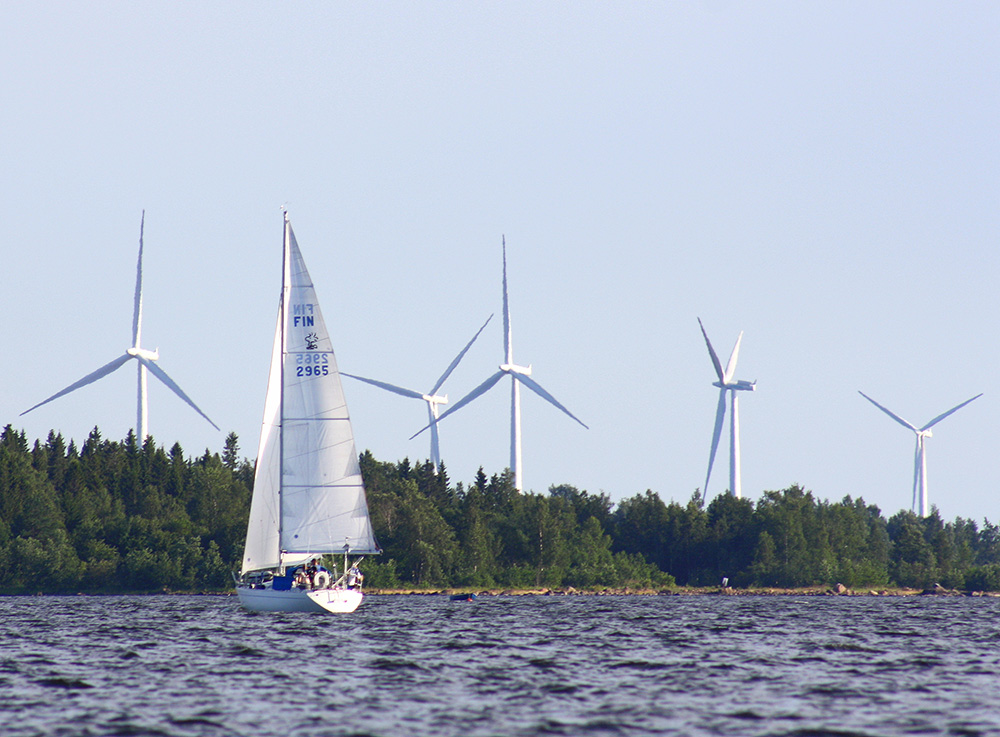 BotH₂nia turns the Gulf of Bothnia to a new Persian Gulf

Hydrogen is making people ambitious around the northern arm of the Baltic Sea. “We will turn the Gulf of Bothnia to a new Persian Gulf”, says Matti Malkamäki, a member of the steering group of the Finnish hydrogen cluster.

The wind blows hard in the Gulf

The key to the project’s success is the availability of affordable renewable energy by, and on, the windy sea. For instance, over 20 GW of new capacity for offshore wind energy is planned for the Gulf area.

The conditions for wind power construction are good in the area. The ground is flat, letting the wind blow faster; population density is low, leaving lots of space for wind farms; and the sea is shallow, reducing the construction cost of offshore wind farms.

In addition to wind power, the 20 GW of existing hydropower in Sweden and Finland, as well as new nuclear reactors (in construction or planned), offer electricity without emissions. There are also vast biomass resources.

A further benefit for exporting hydrogen from the region is its existing infrastructure.

In the European Hydrogen Backbone (EHB) initiative, Gasgrid Finland has envisioned a hydrogen pipeline that would first connect the Swedish and Finnish sides of the Gulf of Bothnia. Later, hydrogen networks could be extended all the way to Central Europe.

Of the many international harbours by the sea, several – such as Kokkola and Raahe – are already making plans for hydrogen. That makes a difference.

“The demand in Germany alone will be so big that all the hydrogen from the Nordic countries could be used there”, Malkamäki observes.

“Most of our competition comes from hydrogen producers much further south. Solar energy reduces the cost of producing hydrogen close to the equator, but if those places must build a harbour before exporting their hydrogen, our prices will be competitive with theirs.”

Hydrogen from the Gulf of Bothnia is not only meant for export. Indeed, the proximity of several companies that need hydrogen is crucial for developing the local hydrogen economy.

One of the main consumers of hydrogen in the region will be the steel industry. SSAB, LKAB and Vattenfall have built a pilot facility for the direct reduction of iron ore in Luleå. The industrialisation of HYBRIT technology will start in Gällivare, where the world’s first production plant for fossil-free sponge iron will be built in 2026. At SSAB’s steel plant in Raahe, the use of coal is planned to end by 2040.

Among the other major industrial users, Kemira, a global chemicals company, uses hydrogen in its processes. Kemira, with LUT University and several other companies, is also planning a pilot for synthetic fuel production. The required CO2 would be captured from a Finnsementti cement factory.

The region is rich in industries using wood as a raw material. For synthetic fuel production, these biobased industries serve as a sustainable source of CO2, enabling the creation of carbon sinks.

Several other large players in the region have extended their expertise to the hydrogen business.

Wärtsilä is among the maritime giants taking part in the ZEEDS initiative, whose purpose is to create an entire ecosystem of offshore clean fuel production and distribution hubs and deploy them in strategic locations around the globe. Wärtsilä, City of Vaasa, electricity company Vaasan Sähkö and energy company EPV Energia intend to build a green hydrogen production plant and storage facilities in Vaasa.

Electricity, heat and cooling company Helen is developing hydrogen and power-to-X solutions because it aims to achieve 100% carbon neutrality in its energy production by 2035.

A further strength of the Gulf of Bothnia is the range of small companies involved with new hydrogen technologies. Several of them have been with BotH2nia from the beginning.

Aurelia Turbines develops and manufactures small gas turbines that can use hydrogen as a fuel. Its key technology has been developed in collaboration with LUT University and the German Aerospace Center, DLR.

Botnia H2Tec Services is an integrator that also trains customers to be experts in hydrogen technologies.

Elcogen develops and manufactures solid oxide cells and stacks for SOFC and electrolyser (SOEC) use. Its products have been supplied to more than 50 customers around the world.

Flexens is developing islands and cities with 100% renewable energy systems. Currently, it is working with other partners to turn four islands in Åland into sustainable local renewable energy communities. The project involves shipping. As early as 2024, a vessel using hydrogen can sail in the Åland archipelago.

Hycamite TCD Technologies decomposes methane into hydrogen and solid, high-value carbon. The technology is based on multi-year research performed by the University of Oulu. The process does not produce any carbon dioxide, and when biogas or other CO2-neutral feedstock is used, the process performs as a carbon sink.

P2X Solutions demonstrates the entire value chain of hydrogen production from renewable electricity generation. It is building an electrolysis plant and a carbon capture system. The goal is to produce green hydrogen as well as synthetic fuel.

Q Power, with LSJH and Lounavoima, has piloted the methanation of landfill gas. The hydrogen required for a power-to-X plant is made by electrolysers. The gas produced is used in heavy goods vehicles and for applications in nearby industries.

BotH₂nia network serves as an umbrella brand and collaboration platform for hydrogen-related initiatives. It will be used for facilitating communication between projects and promoting the hydrogen-related technology and production of the area.

Although the core area of the network is the Gulf of Bothnia in the Baltic Sea, the BotH2nia initiative covers the whole of Finland, Sweden and other countries around the Baltic Sea.

“BotH₂nia is always open for new companies”, remarks Minna Näsman, Head of Energy of CLIC Innovation, the facilitator of the BotH₂nia network.

See more information about BotH₂nia and join the network: www.both2nia.com